The blog below is from Gospel Relevance. I know so many people that could benefit from this that it was very worth posting here. Blessings all!

Suffering is inevitable. Bitterness is a choice.

Recently, I listened to John Piper speak about bitterness on one of the “Ask Pastor John” audio clips that Desiring God holds almost daily. Piper mentions four ways we can fight bitterness. You can listen to the full audio here, and I have also listed Piper’s four points below with some of his thoughts to follow. 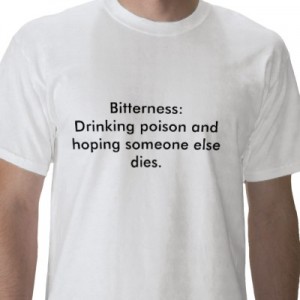 We fight bitterness by:

1) Letting it sink in that you don’t deserve better than you got from God.

It doesn’t mean the way you were treated was right or they were not guilty.

It doesn’t mean that God approves what has been done to you.

It simply means that anything that happens to us is not a wrong from God.

How freeing this becomes when realized!

2) Realizing and pondering how much we have been given from God.

Verse used: “Let all bitterness and wrath and anger and clamor and slander be put away from you, along with malice” (Ephesians 4:31).

Remember to walk in love and forgive as Christ did for us.

If I have overwhelming love and forgiveness — how can I not extend it to others?

If we hold a grudge, we are essentially saying this: Christ acted inadequately or foolishly when he did not hold a grudge against me.

3) Believing that even amidst all the pain and suffering, God is working all things out for our good.

Verse used: “For this light momentary affliction is preparing for us an eternal weight of glory beyond all comparison” (2 Cor. 4:17).

Sins and injustices and slanders done against us are not just something we should forgive, but something that is actually producing a weight of glory in us that would not be produced if they did not happen.

4) Taking hope in the fact that nobody gets away with anything.

Verse used: “Beloved, never avenge yourselves, but leave it to the wrath of God, for it is written, “Vengeance is mine, I will repay, says the Lord” (Romans 12:19).

Nobody who has done you wrong will get away with it.

God says, “You need to relax and let me be the one who take vengeance.”

All wrongdoing gets punished at the cross or in hell.

If bitterness or unforgiveness is something you are facing, I recommend to take heed to Piper’s biblical advice. Don’t drink the poison.